"The Internet" has long been held out as panacea for Labor's moribund membership structure. However, efforts to increase membership engagement online have comprehensively failed in practice over the past decade.The mistake that the party has made during this period has been to take a technology driven, "Build it and they will come" approach to promoting online engagement. When the Party gets serious about realising the potential of the internet as a platform for organising, campaigning and fundraising, it needs to start putting people, not technology, at the centre of its online strategy.

In the simplest terms, this means spending more money on people - online organisers and community managers - than on technology platforms. But in the larger sense, it means designing an architecture for participation for members and prospective members. This will mean asking some basic questions about people's incentives - about why and how people want to engage with the Party online.

My view is that if we look at campaigns that have successfully mobilised online engagement, people are now far more predisposed to organising around issues rather than party or ideology. Further, they are cynical about their ability to be 'heard' within a traditional party structure and want to be given the ability to directly influence outcomes through their online activities without being subject to hierarchical control.

I believe there's a way to balance these desires against the organisational needs of the parliamentary Party by adapting the Policy Action Caucus ('PAC') structure agreed to at National Conference as a vehicle for online engagement. Consider this proposal:


Such a proposal would give ALP members and prospective members a strong incentive to engage in online organising (ie the potential to have their issue debated in a high profile forum at ALP conference and to influence policy makers) whilst also ensuring that existing party structures remained intact and the organisation proper retained ultimate control over the policy of the Party. It would open the party up to members of the community who may never have previously considered joining the ALP or direct political involvement of any kind (imagine the people a "Labor for NDIS" group could bring in). It would entice many fellow travellers to engage with the ALP, without requiring them to make the initial commitment required to become a full member - creating a large target pool of prospective members for the party's recruitment activities. It would create communities of interest that could engage in real world organising activities (eg you could imagine PACs arranging to staff the voting booths of MPs who agree to champion their issues). It would create a powerful micro-donations fundraising structure for the party to reduce the need for large scale donations. Ultimately, it would make Labor the primary platform for progressive organising once again.

All it would take is for the ALP to devolve a small amount of control over the policy agenda (not even control over decision making!) to the membership.

As far back as 2002, the Hawke/Wrann Review stated that it was desirable to “broaden the basis of membership activity, capacity for involvement in policy formulation” through online engagement. The review recognised that it was unhealthy that “vigorous debate on controversial issues is being avoided for the sake of a purely cosmetic unity” and stated that “Alternative processes must be sought to promote input from more sectors of the Party”.

In this regard the Review recommended the exploration of the formation of policy branches and online branches, noting:

“It may be possible to extend this concept to online branches, which are run nationally, and which encourage people to join the appropriate State branch. With such a scheme, it would be possible to offer online members the opportunity to belong to, and participate in, online policy forums. Again, it is not clear what the best way to do this is, and one of the first tasks of online branches would be to determine the rules for engagement and mechanisms to avoid online discussions becoming dominated by particular individuals”.


The intent behind this recommendation was admirable - as much for its humility about what it didn't know as for its optimism about what could be achieved. Unfortunately, in the decade since, little progress has been made in realising this vision. There are no "online branches", "online policy forums" or meaningful ways for members or prospective members to become "involved in policy formulation online".

The tragedy of this situation is that it is not for a lack of attention from the Party. As the the 2010 National Review recognises, the Party has invested enormous sums at both State and Federal levels to roll out infrastructure for online engagement:

9.4 Recently the Party has begun investing in a new infrastructure to facilitate this. The new LaborConnect function as part of www.alp.org.au is powered by Australian developed software ‘Community Engine’. This function enables Labor supporters to comment on articles, join affinity groups and participate in online discussions on policies or campaigns. The potential for this tool to be expanded and used to assist party building activities should be obvious. Further resourcing of this area should be considered by the Party nationally.

9.5 The creation of the online ‘Think Tank’ function on www.alp.org.au has also assisted with feedback from members and supporters. This Review was the first major Party consultation to have benefited from the new function. Over 3500 members and supporters participated, the largest single interaction during the Review process. The ability to post brief, targeted contributions seems to have inspired many people to participate.


The Party has built world class platforms for ALP members and prospective members to engage with the Party and each other over the preceding two years. But when you log onto these platforms, you can see the digital tumbleweeds everywhere you look.

The two most popular groups on LaborConnect, the Labor Environment Action Network and Young Labor, have both had only one wall post from users in 2012. 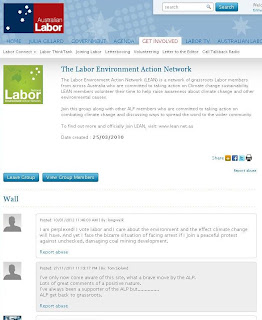 The Labor ThinkTank which is designed to capture policy contributions from members hasn't had a new 'issue' added since October 2011. 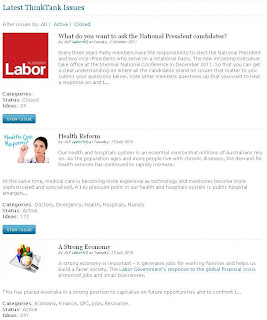 Even worse, it's not clear that there's ever been a real world event organised by a user through the site. 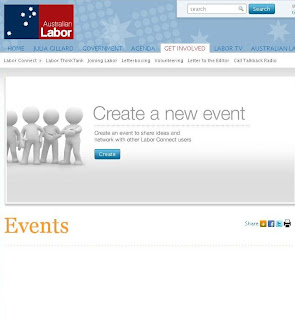 A new Party member joining LaborConnect to interact with the Party and other members is in for a frustrating experience. There's literally nobody there to interact with.

Despite this demonstrable failure, the 2010 National Review recommended that further Party resources should be spent expanding these platforms. In addition, US based vendors have been hovering trying to gull the Party into investing even more money on new campaigning platforms. Even Laurie Oakes was at it on the weekend, insisting that:

Frankly, the Party shouldn't spend another cent on online infrastructure, study tours or high priced American consultants until it learns the basics of online organising. In this respect, lesson number one needs to be: Online Organising is about People, not Technology.

Technology might provide people with a new and easier way of engaging with each other - but it won't give them a reason or an incentive to engage with others. As the geeks have been saying for more than a decade now, regardless of the technology, online communications is a conversation. Unless your online engagement is able to satisfy the basic prerequisites of a conversation between two people, you won't even be able to start building an online community.

What are the basic prerequisites of a conversation?
Labor's online engagement fails these requirements at every step. There are not enough ALP members online at LaborConnect at any time to sustain a conversation and even if there were, there would be no reason for members to talk to each other. Ultimately, because LaborConnect is completely isolated from both the organisational and policy making functions of the ALP, there's nothing you can do there that you couldn't do much more enjoyably on Facebook, Twitter, Tumblr or the local pub. Online members are just as disenfranchised from the mechanisms of power of the party as any other member. In essence, many of the same obstacles things that make attending branch meetings unappealing to people apply equally to the Party's online engagement.

There's good news and bad news about what the ALP needs to do to promote genuine online engagement. The good news is that it won't cost the Party another cent in IT infrastructure and the party has already agreed to creating the structures that could support it. The bad news is that is requires the ALP to devolve some degree of control over the policy agenda (but not decision making) to online members - something that in the past, the Party has found to be even more difficult.

(a) The National Secretariat should establish a National Online Policy Branch.

(b) Attendance at the National Online Policy Branch does not satisfy attendance requirements for voting in Party elections, unless a state or territory branch’s rules expressly provide that it does.

(d) State and territory branches are encouraged to provide for the establishment of a ‘Labor Policy Action Caucus’ or ‘Labor PAC’ where a group has:

(ii) a patron from both the state and federal parliamentary caucuses, unless otherwise determined by its Administrative Committee

(iii) a statement of its name, objectives and rules, approved by its Administrative Committee.

(e) Labor PACs should enjoy the same level of support from state and territory branch offices that constituent units enjoy in that state or territory. In particular, they should be permitted to:

(i) promote policy forums in Party publications and bulletins

(ii) provide administrative support for elections and the maintenance of membership lists, as they do for local branches.

(h) The administrative, financial and fundraising regimes that govern Labor PACs should be determined by each state and territory branch.


The idea of providing an outlet for membership engagement on an issue specific basis is a good one that would better allow the ALP to compete with competitor political groups organised on this basis (eg single issue groups like Amnesty, Greenpeace etc and multi-issue campaigning organisations like Get Up!). For better or for worse, the potency of broad ideology as a focal point for motivating political organising has been in decline for at least the past 30 years. PAC style party structures to enable issue based engagement is a sensible response to these changes.

However, while these proposals are well intentioned, as currently defined they are unlikely to succeed for many of the same reasons as outlined above. By folding PACs into the existing organisational hierarchy they fail to address the lack of incentives for members to participate in these structures.

In order to make PACs work, they need to be taken out of the party hierarchy and given the ability to directly achieve outcomes without the fiat of the Party organisation. Both the organisers of PACs and their members need to be given both individual agency to organise in the advancement of their issues and a genuine incentive to do so. Merging the PAC concept with the National Online Policy Branch and then linking these structures directly with the floor of National/State Conferences has the potential to create a workable model that creates real incentives for members to engage online and organise.

The characteristics of such a model might be:
Benefits

While a change of this nature will inevitably bring with it a number of challenges for the Party, on balance the benefits that it would bring in the form of a growing and re-energised membership would far outweigh the costs.